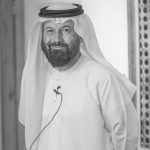 The most important and highly celebrated artist of the UAE, Abdul Qader Al Rais, at the age of 14 has done wonders in painting and was well received in Kuwait where he resided as a student.
He was awarded first honour as a young artist for his artwork which was inspired by the movie “Agony & the Ecstasy,” and signaled the beginning of his extraordinary life in art. Abdul Qader’s incessant pencil and watercolour sketches clearly defined his role in life as an artist. He was a perfectionist who laboured to get the right colours, studied different techniques and applied that knowledge to successive paintings.
Largely self-taught, his interest in old local architecture gems and nature were depicted in romantic realism. His early work explores local scenery, coastlines and idyllic landscape in the UAE. They were essentially realist but it is an extraordinary realism distilled by an exacting eye and a mystical imagination which gives his works much of its power. Not only does he capture the place, but also the sense of time, in a medium that is most expressive, appealing and challenging – watercolour.
These early works has led to continued success, winning awards after awards and has garnered the attention of national and international media. Abdul Qader Al Rais became a household name in the GCC world of fine arts.
He continued for the next several years to concentrate on local sceneries that became his trademark. Then, at the crucial juncture of his career, when he was moving beyond the traditional subjects in watercolour so indelibly associated with his name, Abdul Qader stepped outside himself and began to address issues of artistic authorship and individual style with acuity and critical distance.
Motifs of geometric ops producing multiple illusions of depth were initially added on to the subject. With this series, Abdul Qader succeeded in making the geometric forms surrounding the subject matter equally important as the subject matter itself. Moving further, changes in paint handling and stylistic staccato make for extreme variations among his realistic paintings resulting into calligraphic abstract juxtaposed with geometric ops and realistic images in vibrant new canvasses.
The merging of style is his language of pure individual self-expression – and that style is not inextricably bound to a single, authorial hand, but rather separate, mobile, detachable, and potentially re-inhabitable – Abdul Qader Al Raes’ signature style.
His new works both in oil and watercolour retain much of the original influences and may be familiar to the Middle Eastern eye, but the individual who created them remains enigmatic.
Born in 1951, he left Dubai to study in Kuwait at the age of six and stayed with his sister until he was 18 yrs old. Undoubtedly, Abdul Qader’s early experiences in Kuwait, including the teachings impacted his development both artistically and intellectually. Abdul Qader left grammar school and returned to Dubai in 1974 where he worked at the Ministry of Labour as a labour inspector. He pursued his education and earned a degree in Sharia Law at the United Arab Emirates University, Al Ain. 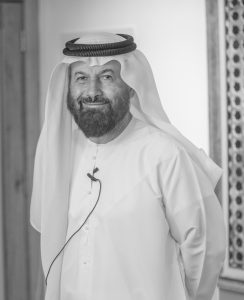